Vanishing Points and Their Applications

Vanishing points are an important concept in 3D vision. Many papers related to them are using a notation called Gaussian sphere representation, which I find hard to understand at the beginning. This document will summarize what vanishing points (and their “Gaussian sphere representation”) are, how to represent them, what information they encode, how to find them, and why they are useful.

WARNING: This article is for people who want to learn more about vanishing points. Basic knowledge in 3D vision is assumed (e.g., you know the existance of camera calibraion (intrinsic) matrices).

With perspective geometry, all 3D parallel lines will intersect at the same point in 2D at their vanishing points when they are projected to an image. To see this, we can write down the equation of a 3D ray. Any point on a ray can be represented with \(\textbf{o}+\lambda \mathbf{d}\), in which \(\bf o\) is the origin and \(\mathbf{d}\) is the direction of the line. Let \(K\) be the camera calibration matrix, we have its 2D projection being

The above derivation also tells us that if we can detect the vanishing point \(\bf p\) in an image, we can compute the direction \(\mathbf{d}\) of those parallel lines in 3D! Isn't it amazing that we can infer the 3D information from single 2D images? In the next section, I will present an elegant and numerically stable way to compute \(\bf d\) from two 3D parallel lines.

You can see that the vector \(\mathbf{d}\) is indeed a better representation compared to using the intersection point on the image plane. First, if \(\mathbf{d}\) does not intersect with the focal plane at all, e.g., when it is vertical, the vanishing point \(\bf p\) will be near the infinite, which is ill-condition. Second, it is hard to define a metric to measure the distance between two vanishing points. The common-used Euclidean distance is not a good metric if the camera calibration is known. With the direction vector \(\mathbf{d}\), we can use the angle between them

as a more reasonable distance metric.

Here, I give a RANSAC-based vanishing point detection algorithm that works with the Manhattan scenes, i.e., scenes with three orthogonal vanishing points, when the camera calibration is known. The algorithm starts with a set of detected 2D lines that can be found with LSD and then does RANSAC:

For scenes that are not Manhattan or the camera is not calibrated, a classic way is to use the combination of LSD + J-linkage. Readers can refer to the J-linkage clustering algorithm for more details.

Photo forensics is an art to detect whether a photo was tampered by Photoshop. In this example, we will check if a photo was cropped. This is equivalent to recovering the camera calibration matrix

Why \(K\) can tell us whether an image was cropped or not? This is because for common cameras and lens, the choice of the focal length \(f\) is often limited and the offset of the camera center \((o_x,o_y)\) should be around the center of the image. An image that has been arbitrarily cropped would violate those properties.

to find the best camera parameters. 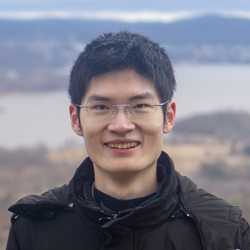 I am interested in the interdisciplinary field of computer vision and computer graphics.